A must-visit bakery for Japanese tourists in Tasmania

Tasmania is known for the outstanding wilderness, unique and abundant wildlife, and food and wine. But for Japanese tourists, Tasmania is known for a bakery shop. Located halfway between Tasmania’s two major cities, Hobart and Launceston, Ross is a quiet town of approximately 400 populations. Although Ross is noted for the rich convict history, it is not a typical must-visit place for many tourists. The main attraction of the town is ‘the bridge’, the sandstone carved bridge built by convict labour in the early 19th century. Yet, for Japanese tourists, the main attraction is not the bridge, but the bakery. 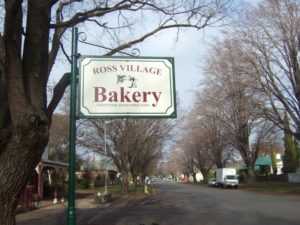 The Ross Bakery Village, is the original bakery operated in Ross for over 100 years. It is a popular bakery with its traditional wood-fired oven and old-fashioned recipes. Their ‘Vanilla Slice’ won the State’s best award and they sell them now as ‘world’s best’. But then again, the reputation of the bakery is not what is attracting Japanese tourists. So, what’s the secret?

There is a rumor that the Ross Bakery Village is a model of the bakery shop in Kiki’s Delivery Service, a Japanese animation film produced by Studio Ghibli. In the film, a young witch named Kiki, travels alone to a new town. She meets a lady who owns a bakery and offers accommodation at the back of her bakery. The bakery shop becomes the main base in the story. The Ross Bakery also runs Bed and Breakfast, and there is a room at the back of the bakery, called ‘Kiki’s room’. For this, The Ross Bakery is believed to be the model of the bakery and Kiki’s room. There is only one room, so you need to be lucky to stay. When I lived in Tasmania, I remember a Japanese exchange student showed me a picture of the Kiki’s room, and proudly said that ‘I stayed in this room’.

It is important to mention that this is just a rumor spread among Japanese from word of mouth. These days, Lonely Planet also contributes to it because they introduce the Ross Bakery with this rumor. Whether it is true or not, since films by Studio Ghibli are adored and admired by many Japanese people just like Disney, there is no end to the number of Japanese tourists who the Ross Bakery. It is like this, if you go to Tasmania, you need to visit the bakery.